When Kathy and I arrived at the Saluda Fire Station at noon on November 28, 2015, there was already a huge crowd.  Bikers coming from all around Polk county to donate a toy to the Saluda Fire Department.  There must have been one thousand bikes.

The Saluda Fire Department served us Bar B Q and hot dogs.  At two oclock, we left and headed down U.S. 176 towards Tryon.  We went down the Saluda grade which is plenty of excitement for most motorcyclists. 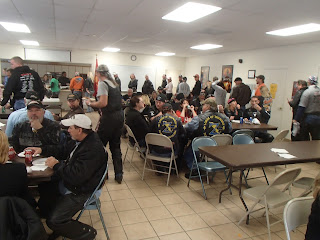 People were out in the yard waving and cheering as we rode by all along the route.  We rode through Tryon, North Carolina.  As we approached the South Carolina state line, my friend, Ken was standing in front of Bird Mountain Liquor Market taking still pictures and movies as we passed into South Carolina.  I hope he posts those pictures on Bird Mountain's Facebook page.  I am certain that movie will end up on You Tube. 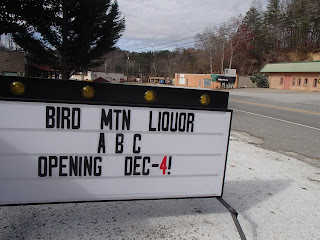 We proceeded on Highway 14 to Highway 9.  We turned north towards Mill Spring, North Carolina.  This is one beautiful strip of highway.  You see the big mountains of North Carolina in the background as you motor up and down the foothills.

In Mill Spring, we turned left onto Highway 108 and ended up at the Polk county courthouse in Columbus, North Carolina.  The steps of the courthouse was covered with donated toys.

October 31, 2015 in Downtown Tryon, North Carolina was the Tryon "Rolling Art" Antique Car, Truck and Motorcycle Show.  I thought I would take my 1961 Harley Davidson Super 10.  Maybe I could win a prize.  I knew there was no chance of that when that 1927 Indian Four showed up.

There were over a hundred great looking antique cars and trucks and bikes at  The Tryon Car show in Tryon, North Carolina.  A Ferrari won for the cars.  A 1930 Ford Truck won for the trucks.  The prizes were decided by popular vote.  The weather was perfect.

Thompson Garden Center donated their parking lot for the Tryon Antique Car Show.  They had the movie,"The World's Fastest Indian" playing on the DVD in the lobby .  If you are a motorcycle enthusiast and you haven't seen that movie starring Anthony Hopkins, check it out.  It is a super motorcycle, human spirit movie.

Any antique car show is fun.  This one seemed a little cooler than most.  There were lots of British cars including a 1937 Rolls Royce.   Antique car shows let you know how far automobiles have come since they were invented.  Here,in 1937, the finest car in the world was built with no heater.  That luxury Packard didn't look like much of a car compared to that Rolls. There were lots of Volkswagen.  There were a few rat rods.

There were 56 Chevys and Plymouths and cool looking trucks were everywhere.  The Tryon "Rolling Art" Antique Car Show sponsored by Mother's Car Polish is one car show will be at next year.

Put the Tryon Rolling Art Antique Automobile, Truck and Motorcycle Show on your list of events to be at next year.  It was big this year.  It will be huge next year.  It is in October in Tryon, North Carolina.
Posted by Ron D. Climer at 7:40 AM No comments: