Motorcycle In The Living Room

When you buy a new Harley Davidson motorcycle and your wife says,"Let's put that in the living room.", you know you have done good.

After my visit to the Harley Davidson museum, I decided that I wanted to look for a Hummer.  I looked on Craigslist.  I looked on Ebay.  I went to a couple of antique motorcycle events like the one in Chesnee, South Carolina the last week end in July.  There was no Hummers for sale or on display.  I decided to expand my search on Craigslist.  When I got to Atlanta, I found one.  It was fully restored to like new condition.  It was only 550 miles away.

I hopped in my pick up truck and drove to Port Saint Joe, Florida and bought a 1961 Harley Davidson Super Ten.  If you have never been to Port Saint Joe,Florida, watch the last scene of "Easy Rider".   I am pretty sure I was on the same road where that scene was shot.

When I got home, Kathy said,"That motorcycle is too nice to stick in the garage.  We are putting that in the living room."   Life is good.  Do you think I can join the Harley Owner's Group as a junior member ?
Posted by Ron D. Climer at 11:08 AM 1 comment:

An auctions is still a fun and exciting event.  Kathy came home yesterday from an antique auction with another surprise box lot.  It had two Schrade U.S.A. pocket knives in it.

Today; in modern America, four per cent of men carry a pocket knife.  Here in the Carolinas, I think that is closer to 75%.  Fifty years ago, when carrying a pocket knife was a socially acceptable practice, there was a pocket knife for every man.  There were big ones and little ones.  There were knifes with multiple blades.  There were all kinds of pocket knives.  In my previous article I mentioned that Coca Cola and many other companies gave away and sold pocket knives with advertising on them.

Kathy came home from the antique auction with a box with four pocket knives in it.  One is a modern Schrade U.S.A.  with a logo of the "North American Hunting Club" on the blade.  One is an old Schrade that says "Schrade Cut.Co Walden N.Y " on the blade.  It is a gentleman's knife.  It is very small with two blades.  It is shiny.  Kathy also brought home a Buck X 11 pocket knife with the original box.

There was also an Elgin pocket watch among Kathy's treasures.  You can open up the back and watch the watch tick.  Inside it says" Elgin Natl Watch Co. U.S.A.   There is a serial number (27126210).

If you have ever been to an auction, you are familiar with a "box lot".  A box lot is when the auctioneer auctions a box of stuff.  There may be five to twenty five items in the box.  This is good for the auctioneer.  Often, the bidders that are bidding are interested in different items in the box.  Box lots are a surprise.  We just recently had such a surprise.  We bought a box lot with several items.  One item looked like a pendant .  After closer inspection, it was a very unique knife.  It has two folding blades that come out from either side.  It was a Coca Cola advertisement with the phrase "Relieves Fatigue" on it.  Coca Cola has not used that phrase since 1906.  This knife is old.  In the picture below, that is a quarter in the picture.

Kathy put the knife for sale at our booth at The Tryon Antique Mall on U.S. Hiway 176 in Tryon, North Carolina.  We also found a small pocket knife shaped like a Coke bottle.  The Coca Cola Company must have sold or given away a lot of different pocket knives as advertising. 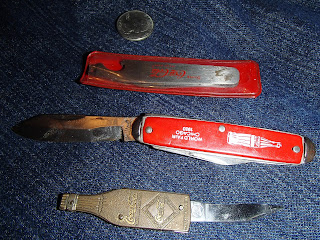 Kathy has other Coca Cola advertising paraphernalia  in her booth.  If you have any antiques that you want to sell, call Kathy at 828 755 6996
Posted by Ron D. Climer at 2:32 PM 2 comments: